A positively charged collagenous hemostatic agent, Superstat, has been found to have superior hemostatic characteristics while at the same time undergoing solvation during the hemostatic event.

When this group began studies of collagen approximately 15 years ago, efforts were initially directed towards modifying collagen as a polymeric material for vascular surgical bypasses 1-4 . It was obviously necessary to decrease the thrombotic characteristics of collagen which was done by selectively neutralizing the positively charged end amino acids of the collagen helices, while simultaneously manipulating collagen (an elegant polymeric material which replicated every 1,000 moieties).

When this work commenced it was obvious that making collagen a more potent blood coagulation surface by making it “more positive,” to potentiate the thrombotic effect, might be possible. It was not initially obvious how to carry out this objective. However, three factors immediately became apparent when the development of a modern hemostatic agent was dealt with conceptually: 1) the material had to be an effective hemostat, 2) it had to have a large surface area to carry out its task rapidly, and 3) it had to solvate while carrying out hemostasis.

A specially prepared small polypeptide collagen derivative, acid washed collagen, was used as the initial hemostatic agent. Several concentrations of calcium were added to measure the effect to potentiate hemostasis.

The material was brought into solution by adding it in stoichiometric amounts to water at 40° C. Calcium was added in appropriate physiological concentration.

Following this, freeze drying was carried out, using two methods:

The pads of Superstat, once freeze drying was completed, were placed into marked packages, first for animal studies and then ultimately for human use. The packages were sterilized using either ETO or gamma irradiation. Sterility is ascertained by multiple cultures of both native Superstat and sporestrips placed in the hemostatic containers sterilized in the same ambient condition as was the hemostatic agent itself. The characteristic structure of the microcavitated Superstat was monitored microscopically with each batch of the material.

It was found that both the initial shell freeze dried and shelf freeze dried material solvated rapidly in producing hemostasis. Prior to developing effective application techniques, it was not at all certain that material could be used effectively. However, application to a bleeding site in concentrations up to Superstat 5%, subsequently packing off with a laparotomy pad, resulted in rapid hemostasis (Table I).

The material was first evaluated in 30 dogs (Tables I & II). Incisions were made in spleen and liver. Healing characteristics, in comparison with several other hemostatic agents included Avitene, Surgicel, Gelfoam, Collatamp and Kolagen Haemostyptikum Vlies in both subcutaneous healing sites as well as in the overt incisional areas in spleen, liver, skin were performed (Figure 1).

Initially it was very difficult to effectively apply Superstat since no solvating hemostatic agent had previously been tested. It ultimately became obvious that an effective technique for application of this material involved placing it on the point of bleeding and packing the whole area off with a gauze Laparotomy pad.

Chronic studies were carried out measuring the healing characteristics of Superstat, in comparison with the other hemostatic agents described above, by placing them in subcutaneous pouches and serially excising the intact pouches at 2 hours, 2 days, 7, 14, and 21 days (Figure 1).

The initial description of the effectiveness of Superstat in man has come from more than 130 applications in man (Table III). The ultimate efficacy of Superstat in man is described in 5 anecdotal experiences in the operating room. It was impossible to produce hemostasis using any other material available to the operating surgeons. This involved two neurosurgical and three peripheral vascular experiences by people who have since joined the multicenter trial by Superstat. In each instance, hemostasis was obtained very rapidly by using Superstat.

Application in man in the majority of instances has been to arterial and anastomotic sites following reconstruction in heparinized patients. No evidence of diffuse intravascular coagulopathy, fibroplasia, infection, persistence of physical residue of Superstat, nonhealing, nor adhesions have been found in any instance in which Superstat had been used, as is often seen with other hemostatic agents clinically.

From the Electrochemical and Biophysical Laboratories of the Vascular Surgical Services, Department of Surgery and Surgical Research, Downstate Medical Center , Brooklyn , New York.
*This work was supported in part by a Grant from the Sawyer Foundation.
Vol.XXVI Trans Am Soc Arcif Intern Organs 1980

Wound Healing After Applying Superstat Based on Histochemical Studies on 2, 7, 14 and 21 days Observation Postoperatively 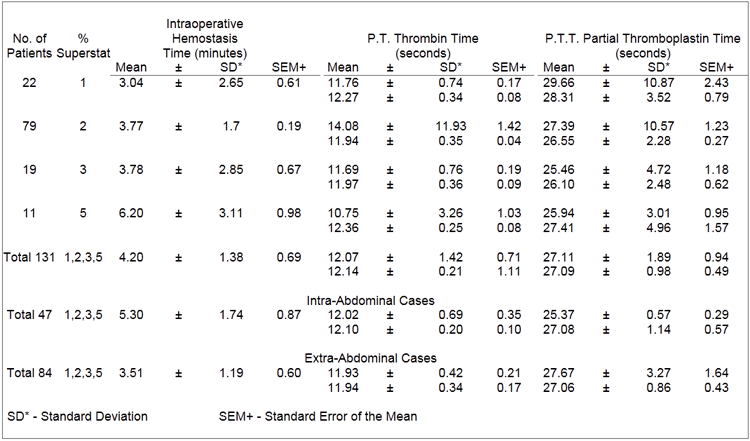 Superstat is a good hemostatic agent since it dissolves while producing hemostasis, leaving no residue; it displays no foreign body effect, permits normal healing, does not appear to produce major adhesions and useful in heparinized patients.

*Figures 1 through 6 not reproduced.

A preliminary report of the initial animal and clinical experiences with a new ultra-positively charged, calcium containing, self dissolving hemostatic agent, Superstat, is presented. The material produces rapid hemostasis due to its extremely high surface area and positive charge, while dissolving during the performance of its activities.

The available evidence suggests that Superstat works by acting as a very potent “electron sink” due to its special charge characteristics, interacting with shed blood to rapidly convert fibrinogen to fibrin. This appears to be in part due to interaction between the alpha helix amino acid side chains of collagen and fibrinogen.

A new effective solvating hemostatic agent, Superstat, has been developed and evaluated in animals and man. It appears to work in part because of its large electron absorbing surface and in part due to the physiologic concentration of calcium. The available information from the first 130 patients in which it had been evaluated suggest that it had few, if any, side effects, leaves no residue following use, and is an extremely effective hemostat under most conditions and in all tested operative areas in man.

6. Tatooles CJ, Braunwald NS . The use of crosslinked gelatin as a tissue adhesive to control hemorrhage from liver and kidney. Surgery 60:857, 1966.